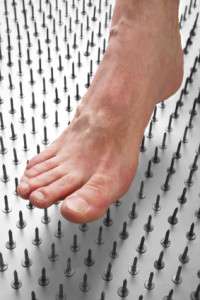 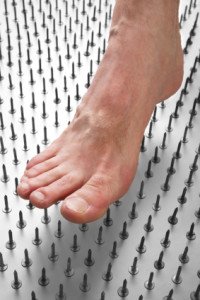 Peripheral Neuropathy (P.N.) – burning, cramping, numbness, tingling, sharp pains in the feet and sometimes hands is becoming extremely common. A high percentage of cases can be reversed without surgery or medications. So it is still difficult to fathom the gauntlet a patient suffering from this condition must confront in an attempt to obtain a correct diagnosis or successful treatment.

The medical literature contains abundance of peer reviewed studies cataloging the multitude of causes that create the above symptoms and awareness of the literature should result in a diagnosis of P.N. and its known cause. Indeed, the Contemporary Neurology Series- essentially the medical bible on such matters, in its peripheral neuropathy in chemical practice volume – which is distributed free to most neurologists and neurosurgeons – lists as many as 80 possible causes.

Yet today the P.N. patient is still told “maybe you have P.N.” Tests for diabetes, spinal cord problems, or nerve entrapment in the ankle may or may not be run. If tests are run and are positive for one of these causes medical intervention into the diabetes or surgical intervention for the spinal cord or ankle problems may be performed. If these procedures are not effective (and this list includes post chemo peripheral neuropathy) the patient is regularly told its idiopathic (has no known cause) and you can take these medications for the rest of your life or you just have to live with it, or both. Huh??

Let’s look at a recent case that entered our practice that is representative of the challenges faced by the average P.N. patient. 70 year old Caucasian male comes in with numb toes that he has been unable to move easily since 1998. He went to his PCP who sent him to a neurologist who told him “his nerve endings were dying.” No diagnosis was rendered. The patient researched the symptoms on his own and came to a self diagnosis of Peripheral Neuropathy. For the record, his diagnosis was correct. He developed further symptoms but his primary symptom was still numbness. His legs also felt like “big lumps”, and he currently feels like he is “walking on rocks”, which he described as being uncomfortable. This description of pain alone suggests three probable, separate, but simultaneous causes of his foot symptoms – all of which by the way are listed in the above mentioned medical neurology textbook series.

He does not have diabetes but was started on Lipitor about the same time some of the symptoms started as he has “always had high cholesterol”. He has had his gallbladder removed and has several thyroid symptoms. He has chronic stomach problems which removing his gallbladder did not resolve. He also has restless leg syndrome (RLS). This was expressed as numbness, tingling, and pain and needles in his legs that made him need to move them at night so he could sleep. All of this history is significant.

After a complete neurological and general systems history and examination was completed here’s what was found; His examination was suggestive of what is termed a distal symmetric polyneuropathy involving loss of all of the five different types of nerve endings in his feet. This cannot occur due to only one cause. The exam concluded that the spine, ankles, diabetes and/or chemotherapy were not among the causes for his P.N. It was ultimately found that the statin exposure (the Lipitor) was causing the “Restless leg” symptoms and he was referred back to his MD for this matter. Additionally, he also was found to have a gluten intolerance which can cause gluten related peripheral neuropathy and balance conditions about 8-11% of the time. This gluten intolerance by the way was also the cause of his “stomach” problems and unnecessary gallbladder removal. Two of the many causes of “distal symmetric polyneuropathy” (one of many types of neuropathy listed in the literature) are autoimmune diseases and thyroid conditions. This patient tested positive for two autoimmune diseases – Hashimotos – an autoimmune attack on his thyroid – and Celiac- an autoimmune attack triggered by gluten on his small intestines (remember the stomach problem?). He also had multiple additional food allergies, all of which were affecting his immune system which was in turn attacking and damaging his “nerve endings” and “causing them to die”. Many other causes- as per the medical model’s own literature- were ruled out with fairly minimal and cost effective blood salivary and urinary testing.

Management of the above findings has resulted in a cessation of the patients declining symptoms and a symptomatic reversal of 50-70% of the symptoms to date. The patient is about 2/3 of the way through treatment and further progress is expected.

The lesson? If you’re told your P.N. is caused by diabetes, spinal, ankle conditions, or chemo and you haven’t responded to treatment for those diagnosis and you have been relegated to live with it, or with a lifetime drug regimen – find a certified Functional Medicine Doctor or a Board Certified Chiropractic Neurologist, or both in your area and get a full evaluation before giving up.

Link to the original article…

Clinical Pearls on the Complexity of Gluten Sensitivity

During my appt, I was very impressed by how professional and polite the front office staff was, but Dr. Rutherford is such a nice man and was very good about answering any and all questions that my husband and I had regarding my treatment.*

Tracy S
*Disclaimer: There are no guarantees of specific results and results will vary from person to person.

I am overjoyed with my fantastic health improvement since beginning treatment February 24, 2012. This included 4 months while I was out of state. I am filled with gratitude for the insight, knowledge,character, and manner of physicianal treatment from Dr. Rutherford and Dr. Gates. I now know what’s been wrong with me for years, and how to manage my symptoms, so that my health and my disposition have greatly improved and how to continue improving my health. I look forward to my appointments becau…

Joyce F.
*Disclaimer: There are no guarantees of specific results and results will vary from person to person.

All of you at Power Health have gone many extra miles to help Kathleen and me. We see the progress and expect to get better.*

Kenneth J
*Disclaimer: There are no guarantees of specific results and results will vary from person to person.

Courtesy, timely, knowledgeable and friendly is the motto of the day for all employees. Doctors are real people and treat everyone with respect. They identify your problem and take care of it. No one has ever made me feel inferior. That respect and courtesy means a great deal to me as I am a senior citizen and don’t always receive that from younger people.*

Elsie J
*Disclaimer: There are no guarantees of specific results and results will vary from person to person.

It is always a positive experience to come to Power Health. I’m greeted with a smile and rarely wait more than 5 minutes to be seen. Every one is helpful and friendly.*

Joyce M
*Disclaimer: There are no guarantees of specific results and results will vary from person to person.

I had my consultation at Power Health, and am looking forward to my appointment next week. After trying everything under the sun, I was becoming very depressed about my migraines. After talking with Dr. Rutherford, I am hopeful I can finally be cured of my chronic pain. Keep your fingers crossed for me!*

As always friendly staff and my amazing doc thanks.*

Robert C
*Disclaimer: There are no guarantees of specific results and results will vary from person to person.